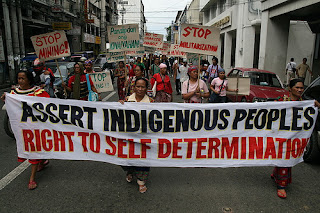 American Indian's oppression was the cornerstone of conquering this side of the Atlantic.  The U.S. government signed over 300 treaties with natives tribes and broke every single one of them.  The U.S. stole sacred land and killed off nations.  Not only the people but their culture and livelihood.

For the first time the United States allowed a United Nations fact-finding mission to determine the impact of the passage of the proposed Declaration of the Rights of Indigenous People.

The 12-day fact-finding mission was performed by James Anaya, a professor of Human Rights Law and Policy at the University of Arizona.  This mission took Anaya all over Indian Country and up to Alaska to determine the experience of natives in this country.  He will be presenting his finding in September to U.N. Human Rights Council.

Reflecting on his mission Anaya said on Democracy Now!

One of the headline catching recommendations that Anaya has suggested, is that the U.S. return some land that was stolen back to native tribe as a way forward for reconciliation.  One specific piece of land was Mount Rushmore, which is located in the Black Hills National Forest in South Dakota, historically this is sacred land for the Lakota (Sioux).  This land was stolen after the U.S. found gold in the black hills, violating the Fort Laramie Treaty of 1868.

In 1980 the Supreme Court decided that the seizure of the black hills from the Lakota was illegal and stated that the U.S. needed to pay the Lakota for the land.  The Lakota refused the money, instead demanding their land back.

This findings of this mission is no surprise as the very foundation of the U.S. is based on stolen land.  The U.S. continued to expand westward in an effort to find new markets and new resources to continue to build their wealth in the world.  The foundation of this wealth was based on the building of the railroad and digging for gold, silver, and other rich resources on stolen land.

In 1871 the U.S. discontinued the treaty process with natives.  A huge blow to sovereignty.

At this point the policy was to assimilate all Indians into white society.  Young Indians were forced to go to boarding schools where they were forced to cut their hair and forbidden from speaking their native tongue.

It wasn’t until the passage of the Indian Reorganization Act of 1934 that Indians were given the right to vote, which makes them the last minority in this country to gain the right to vote.  This also allowed tribes to have democratically elected tribal councils to govern their reservations.  Though these councils were set up by the U.S. government, and often used by them, and not by the traditional native decision-making process, this was a step towards sovereignty.

In the 1970s we saw a rise in American Indian struggle.  This came in the form of the American Indian Movement (AIM), which looked to bring the injustices of native people to the forefront again.  They successfully put these issues in the mainstream again with actions such as occupying Alcatraz, the Bureau of Indian Affairs and Wounded Knee, the site of the Wounded Knee massacre in 1890.  The american public time and time again sided with the Indians in these conflicts.

As a result of this pressure the U.S. passed the American Indian Religious Freedom Act of 1980.  That’s right, American Indians didn’t have the legal right to practice their religion until 1980.  The act states:

That henceforth it shall be the policy of the United States to protect and preserve for American Indians their inherent right of freedom to believe, express, and exercise the traditional religions of the American Indian, Eskimo, Aleut, and Native Hawaiians, including but not limited to access to sites, use and possession of sacred objects, and the freedom to worship through ceremonials and traditional rites.

It should be highlighted that this act gave natives the right to have access to sacred sites.  This often is at odds with sites that are rich in natural resources.  Especially those resources that the U.S. government and corporations can get rich on.

One example is uranium mining in Navajo Nation in Arizona and New Mexico.  The mining for uranium not only destroyed land and Navajo health but helped fund the U.S. war machine.  There are plenty more stories of resistance to the exploitation of sacred lands.

In 2010 President Obama stated that the U.S. supports the U.N. Declaration of the Rights of Indigenous People.  To get an idea of the what the declaration conveys, Article 3 of the declaration states:

Indigenous peoples have the right to self-determination. By virtue of that right they freely determine their political status and freely pursue their economic, social and cultural development.

The reality is the administration has done very little to push for the rights of indigenous people.  They passed the Tribal Law and Order Act, which further militarizes reservations with the addition of more police and judges.  It seems that this is more important to them than addressing housing shortages and astronomical unemployment rates on reservations.

The recommendations by this mission will call the hand of the U.S.  Will they actually pursue reconciliation, reparations and sovereignty of American Indian Nations? I think the answers lies in the increase in struggle for indigenous liberation in this country.

The administration can sign as many documents as they would like to that state they support indigenous rights.  However it won’t be until American Indians see jobs, houses, reparations, their land and sovereignty will the administration’s words mean anything.

Although the likelihood of the U.S. being responsive to a U.N. recommendation is unlikely, the results of this mission creates an opening to bring indigenous issues back to the debate.  The indigenous people of this country are still fighting the same fight as their brothers and sisters of the past.  Now we need to continue to build a large movement that takes on a system that continues the exploitation of native people and land.
Posted by Brian J. Ward at 9:10 AM 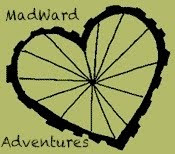 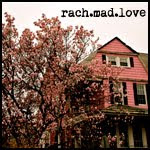